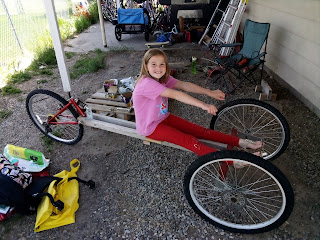 After playing around with a few different ideas for the frame, I decided to start with a solid wheel base. For the steering mechanism I am using the largest hinges I could find at Lowes. I drilled one of the existing holes larger to accept the bolt from the bicycle wheels, then bolted it to the 2x6 that acts as the front of the frame.

For the back of the bike I am using the existing suspension of a mountain bike and attached it with a large section of all thread to the 2x3s that run the length of the frame. The suspension rod is attached using an old satellite dish mounting bracket. I still need to check how true the wheels are and if they hold air, but the wheel base is now complete.

A simple weight test showed that it could hold me and my daughter without any problems. Next I need to get the pedals attached and the chain and idlers installed. I also need to finish building the steering mechanism, and reconnect the rear brake and derailer. Once a seat is installed I should be able to drive it as a recumbent bike, after that I will probably work on the canopy, and lights, then install the electric assist after the fact.

I am really happy with my progress so far. Hopefully I will have it fully enclosed and electrified by the time fall hits.

Let me know your thoughts in the comments below.

Posted by Kendall Purser at 9:17 PM No comments: 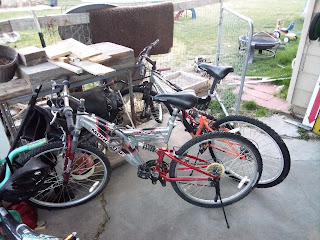 I put some feelers out on Facebook and had 4 bikes donated by neighbors who were looking to get rid of them. Between the 4 bikes I got enough parts to make 2 recumbent trikes, which is the base for my ebike. I was fortunate to get two bikes with rear suspension. This will make for a smoother ride when I get the trike assembled.

For the frame I am using scrap wood left over from several other projects, including a small pallet. This is just a prototype so I can learn the basics, the finished model will be much more streamlined.

Posted by Kendall Purser at 8:35 AM No comments:

A New Goal- an enclosed ebike!

After doing some research into the laws governing Electric Cars and NEVs in my area, I discovered it was going to be a real headache to get something inexpensive for me to drive around town. That was when it hit me. I don't need a Tesla or something like that if I am only going to use the electric car for travel around town, so I started looking at alternatives and discovered a bit of a loophole in the laws for the state of Idaho.

A Class 2 electric assisted bicycle is defined as having up to three wheels, it can go up to 20 mph without pedaling, but can go faster if you do pedal. It is not restricted in what streets it can be driven on, but must stay to the right as much as possible. These bikes can be enclosed making them usable year round, and may have blinkers, windshield wipers, headlights, taillights, etc... They are not required to be registered, have insurance, or a license, so even my 14 year old son, could drive it!

In August 2019, the state of Idaho passed a measure that defined ebikes as bicycles. That means they can be used wherever bicycles are allowed. This opened a whole new door of inquiry for me, and I started looking around at ebike options.

Some companies are already building enclosed tricycles like the one I had in mind. (See the video above) However, to order one and get it shipped to me was still going to cost quite a bit! So I started drawing up plans and making a parts list, and figured I could build a prototype for less than $500. The major cost being the 750 watt conversion kit and batteries.

The basic trike without the electric assist is known as a velomobile, and is a lightweight, aerodynamic bicycle alternative that has been around for decades. This part is relatively easy to build and can be made with parts available at local stores and thrift shops.

Next week is earth week, and I hope to have the beginnings of my electric car/bike in the works before the end of the week is out!

Posted by Kendall Purser at 4:01 PM No comments:


I saw this video on Facebook and was very intrigued. The part of the video that I liked best was the fact that she isn't pushing her lifestyle on other people. We should never tell other people how to live, only invite them to see what we are doing and if they are interested help them make the same changes.

I am all for reusable containers, but this video really made me step back and think about taking that to the next level. I have struggled learning the process of composting, but I believe wholeheartedly in it. I will probably start looking into that again now that we are settled in our new house and possibly look at how I could make some of these other changes as well.
Posted by Kendall Purser at 8:28 AM No comments: 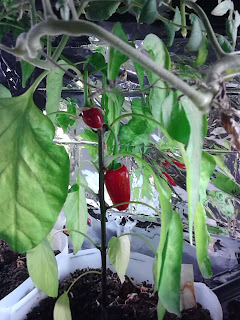 I experimented with an indoor garden for about a year and had some really good results. We moved recently and most of it has since died, but I plan on restarting it soon. The indoor garden was made from a metal shelf that we mounted two 100w CFL lightbulbs in. We lined the shelf with solar curtains that we mounted on cardboard to make them less likely to tear.

The biggest thing that I learned from this experience is how important it is to give plants enough space! I was growing everything in about 5 square feet, but the containers for each plant were not the size they needed to be. As a result the peppers were not as large as they could have been, and the peas and tomatoes kept snaking their way around the other plants, causing problems. When I restart this garden I plan on making full square foot boxes for the larger plants, and I will build a shelf for the milk jug pots to sit around the side so we still have 5 square feet of growing space.
Posted by Kendall Purser at 10:15 AM No comments: 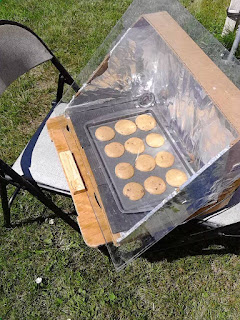 Made some chocolate chip cookies in the solar oven last week, and they were fantastic! Our second batch didn't cook as well because we had some cloud cover move in. But we still maintained between 150 and 200 degrees F. Each batch took about 2 hours to bake.

With a solar oven you need to adjust the direction it is facing about every 15 minutes to maintain your maximum heat.
Posted by Kendall Purser at 10:06 AM No comments:

He uses Heet in the video, but you can also use rubbing alcohol as long as it is higher than 50%, but it will make the bottom of your pot black. Obviously the higher the percentage of alcohol, the more efficient the stove is and the less black will get on your pots.

Original "Cat Stove" Design:
http://jwbasecamp.com/Articles/SuperCat/index.html
Posted by Kendall Purser at 9:35 AM No comments: